The Demise of Physical Money: A Retail Worker’s Perspective 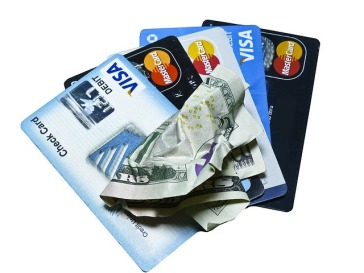 Something I have come to realise about money is that the more you come into direct contact with it, the less alluring it becomes. That may sound like a hollow platitude, but when your history of paid work has predominately involved handling thousands of pounds through face to face transactions and back office duties, the worthlessness of fiat currency burrows into your psyche.

That is not a fatuous comment. I recognise that the entity I proclaim to be worthless is the same entity that allows me to eat and to sleep with a roof over my head. Nevertheless, it is not as simple as surmising that it is the intrinsic value of money that grants the ability to exchange funds for goods. Money has no intrinsic value as I came to discover.

This time two years ago I secured a job working in the cash office of a UK supermarket. It was an opportunity that came about just as I had begun to question the true nature and value of money.

My perception of cash changed on coming across a postcard pack published by the Bank of England called, ‘Your Money: What the Bank Does‘. The pack is no longer available through the bank’s revamped website, but fortunately I downloaded a copy before it was taken down.

Contained within the pack is a section titled, ‘Banknotes and the Promise to Pay‘. Here, the bank offers up a compelling question:

What gives modern banknotes their face value, when they cost only a few pence to make?

The answer may or may not surprise you:

In a word, TRUST. We trust that banknotes can be exchanged for the things we want to buy. We trust ‘The Promise’ that they will be accepted by others for their face value. This trust gives banknotes their value.

Making a distinction between the face value and real value of a currency is the first route in to understanding it’s actual worth.

The value of money is a topic I discussed in a two part series back in 2017 (Is the Value of Money a State of Mind?). Since then a cross section of developments in regards to the rise in alternative payment methods and the creeping decline of physical cash has brought the work I do as a cash office clerk into jeopardy.

When I started, debit cards were already close to overtaking cash as the leading payment of choice in Britain. Recent evidence proves this to be the case. According to the card payment fee comparison service Merchant Machine, the UK is now leading the way in Europe for cashless payments, with contactless technology becoming ever more prominent.

In Merchant Machine’s report (Going Cashless & The Rise Of Contactless Payments), they reveal a 124% rise in the use of contactless in supermarkets, with the percentage of contactless payments received rising to 39%.

The increased popularity of contactless means that it has now become standard to walk down any high street in the UK and see billboards pushing the technology. This example from the Halifax is one example: 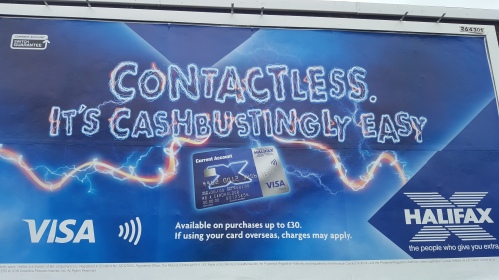 In the summer of 2018 it was announced by UK Finance that card payments had officially overtaken cash transactions for the first time in 2017, a year earlier than had originally been predicted. Whilst the use of debit cards rose 14%, physical cash usage dropped by 15%. Putting this into context, the number of card transactions amounted to 13.2 billion, whilst transactions using cash came in at 13.1 billion. Contactless doubled in popularity to 5.6 billion, whilst an estimated 3 million plus people never used cash at all.

On the surface these figures suggest that cash usage remains on a par with that of card. Current trends, however, indicate that over the coming years the gap will widen further as consumers find the convenience of going cashless more appealing than holding physical money.

A few months after the UK Finance report, the British Retail Consortium reported that over three quarters of retail sales in Britain were now undertaken using cards.

Far from being just another headline on the business pages, these developments are now having a direct impact on those who work with cash for a living.

At the start of this year, I learnt that my role was being diversified. This comes amidst the exponential rise in contactless payments. Consequently, my hours working in the cash office have been pared back, with the remaining time now spent elsewhere in the store.

It is safe to predict that as the percentage of card transactions continues to outweigh cash, cash office clerks nationwide will be increasingly impacted and forced into adapting their work or finding alternative employment.

From a personal perspective, I have yet to see a marked decline in cash since I started in 2017. On top of that, a separate aspect of my job is to service and replenish ATM machines. Deliveries of cash for these have remained consistent over the years.

Overall, though, the consensus is that the percentage of retail sales generated through cash is now less than those made on card. In the end this is the statistic that will direct future structural changes within the sector.

If you look upon cash in terms of a chain, it becomes evident that those who work in a cash office are not the only employees who will feel the effects of cash’s demise.

There’s the drivers who work for the security companies that provide businesses with ATM money and collect bank deposits. High value cash transfers will become less relevant should the trend of card payments outstripping cash continue to grow. How will there roles be redeployed? Will they ultimately face the prospect of finding alternative work or facing redundancy?

To underscore the point, in September 2018, Link reported that over 250 free ATM’s were disappearing every month due to low profitability. The UK currently has over 50,000 such machines.

Outside of this environment are those who work on checkouts. Large supermarkets have on average up to ten self service points where customers can bypass traditional staff operated tills. Self service and contactless tend to go hand in hand, and are actively encouraged in stores. Already some self service tills are marked ‘Cards Only‘, with only around half of those set up to accept cash.

With a reduction in cash and rise in automation, what longevity is there for checkout staff?

Some pubs and cafes in Britain have now stopped accepting cash payments altogether, citing the risk of theft, the cost of using security firms to transport cash and the time it takes to count and bank takings.

If cash is adjudged to be a barrier towards greater levels of productivity, and people opt in greater numbers to go cashless, firms will sacrifice physical currency for technology that speeds up the process of customer transactions.

We are some way from this becoming common practice in larger establishments. But the precedent has been set for others to follow.

Contrary to what some might assume, it is not against the law for businesses to reject payment in cash. Whilst cash is legal tender, the Bank of England state that:

Legal tender has a very narrow and technical meaning, which relates to settling debts. It means that if you are in debt to someone then you can’t be sued for non-payment if you offer full payment of your debts in legal tender.

The Federal Reserve expand on the BOE’s definition by saying that:

United States coins and currency are legal tender for all debts, public charges, taxes, and dues. There is, however, no Federal statute mandating that a private business, a person, or an organization must accept currency or coins as payment for goods or services.

In other words, cash has to be accepted as payment if the funds are to settle a debt e.g. if you are issued with a bill at a restaurant. Take a bar of soap to the checkout, however, and the store selling it is not obligated to accept physical money. In this scenario you are not in debt to the company, therefore they have the power to dictate how their goods can be paid for. The gradual introduction of card only self scan tills is a case in point.

As discussed in numerous other articles of mine, the push towards a ‘cashless society‘ is being directed by the likes of the International Monetary Fund and the Bank for International Settlements. It is also a pillar of the ‘Fourth Industrial Revolution‘ which the World Economic Forum and centrals banks around the world have been dedicating conferences, speeches and working papers to.

To summarise, central banks are in the process of reforming their payment systems, and have over the past few years been increasingly discussing what they term ‘the future of money‘. In the UK, the Real-time gross settlement (RTGS) is the system through which payments are directed. As Victoria Cleland of the Bank of England confirmed in October last year, RTGS is being reformed ‘through choice rather then necessity‘.

Connected to the reforms is the rise of Distributed Ledger Technology (DLT), which works in conjunction with blockchain which by extension connects back to cryprocurrencies. Tests on a ‘renewed‘ RTGS have, according to Cleland, shown that alternative tech such as DLT will be able to connect to it when the time comes.

Shadowing this non-essential drive for reforming payment systems to accommodate the digitisation of money is the overarching goal of introducing central bank issued digital currency – a goal whose origins originate at the aforementioned institutions of the IMF and the BIS.

I believe we should consider the possibility to issue digital currency. There may be a role for the state to supply money to the digital economy. The advantage is clear. Your payment would be immediate, safe, cheap and potentially semi-anonymous… And central banks would retain a sure footing in payments.

Retaining a ‘sure footing‘ can be translated as central banks wanting to retain primary control over the issuance of money in the ‘digital age‘. To achieve this, and to reach a stage where every transaction can be logged and traced back to the individual – which in turn would neutralise a citizen’s right to anonymity – they are relying on people to turn away from cash and into the arms of technological convenience.

Latest statistics demonstrate that they are on track to fulfil their goals over the next decade. Those who work in the field of cash need to think carefully about their future employment prospects, rather than becoming victims to what is an orchestrated agenda to digitise money and gradually faze out the use of coins and banknotes.