It was announced this week that global debt has increased to a new record of $233 trillion (in truth it is much closer to $1 quadrillion as the ‘official’ figure does not include derivative contracts). The Independent picked up on the story by asking, ‘Who has all this debt? Who is it owed to? What does this level of indebtedness mean?‘. According to the Institute of International Finance (IIF), worldwide government debt now amounts to $63 trillion, with households accounting for $44 trillion. 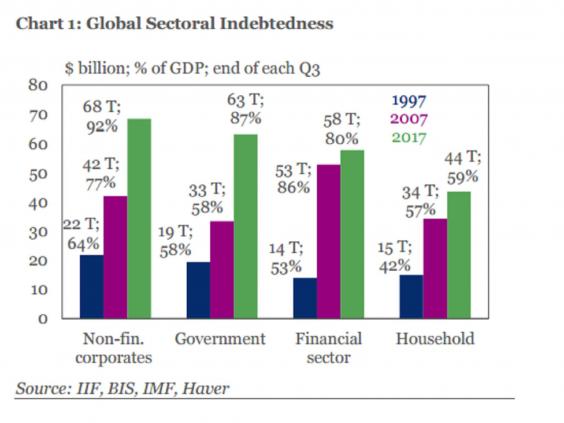 When answering the question of who global debt is owed to, The Independent’s economics editor Ben Chu writes:

What Chu is describing in the second bullet-point is fractional reserve banking, a system which I have previously written about when discussing the Communist Manifesto. Unfortunately, Chu does not specifically name this method of money creation or explain how it works. By failing to do so he is either knowingly or unknowingly deceiving his readership.

Chu then states that, ‘debt is a form of wealth’, a conclusion that could not be more at variants with reality. Money created out of nothing (especially in the guise of a government bond), and then subsequently issued as debt in the form of currency, cannot be construed as wealth. The asset in this scenario amounts to a piece of paper which relies solely on trust to maintain its value.

When it comes to a mortgage or a car loan, the assets are self explanatory. But it is the manner in which the funds for these assets are generated that Chu opts not to question. Fractional reserve banking creates money into existence as debt (at no cost to the lender), and what makes the scam profitable for a select few is the rate of interest charged on this debt which you and I are liable for.

The monetary fiat system has no limitations given that it is no longer constrained by a gold standard. As a result, global debt has ballooned to the heights we see today.

Finally, Chu comments on government debt where he says:

This is a special case because governments, generally, can raise money through taxation and thus effectively control their own income. They also often borrow money in a currency they themselves print, meaning that, in extremis, they can ensure lenders are paid back by printing money.

The notion that the government have control over the money supply, and thus are responsible for printing money, is false. Central banks, along with private banking conglomerates, have sole jurisdiction over this process. The latest figures from the House of Commons library reveals the level of interest that the government is currently paying on it’s debt (and by extension, the public’s debt). In 2016/17, that figure came to £48.7 billion – which is more than some government departments receive in funding. For 2017/18, the estimated £49.9 billion in extra borrowing is tipped to increase interest payments to £54.7 billion.

Chu’s analysis begs one straight forward question – why would a government need to borrow money from a third party if it already had the power to print the money itself? The fact that questions such as this are not asked within the sphere of the mainstream indicates how ingrained the fraudulent system of fractional reserve banking truly is.

MSNBC: US job growth slows to a six-year low in Trump’s first year

Federal Reserve officials expect reductions in corporate and personal taxes to boost consumer and business spending, though they remain unsure of the impact of the new tax law, according to minutes released Wednesday from their December meeting.

“Most participants indicated that prospective changes in federal tax policy were a factor that led them to boost their projections of real GDP growth over the next couple of years,” the minutes stated.